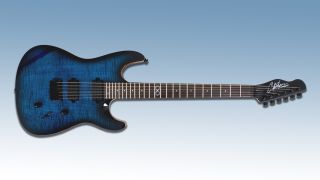 Earlier this year, Chapman Guitars unveiled its V2 range of electric guitars with new and improved specs. Among the most striking was this ML1 Modern in Midnight Sky, which is now being offered at $399 - down from $499 - at Musician’s Friend.

Available at this price for a limited time only ahead of Black Friday, this guitar features a mahogany body with a maple veneer top, finished in a gorgeous glossy navy blue Chapman call Midnight Sky - which accentuates the pattern of the wood in a subtle yet supremely stylish way.

The guitar also features a C-shaped neck and a carved cutaway giving access to all 24 Jumbo frets on a Macassar ebony fretboard - with dotted inlays and the signature Chapman infinity symbol on the 12th fret - which all marry together to create a wonderfully playable instrument.

Chapman Sonorous pickups - renowned for their power, clarity and sustain - in both the neck and bridge positions promise to expand your choice of tonal variation, with a 3-way selector switch and a push-pull coil-tap.

This deal is available for a limited time only, and with several Musician Friend’s pre-Black Friday deals already selling out, you better act fast.