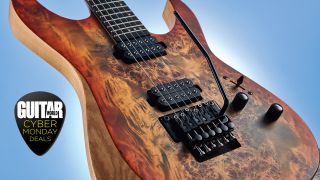 This year's Black Friday saw all the major US music retailers slashing their prices, giving you some of the greatest bargains we’ve probably ever seen. At the forefront of this wave of unbelievable deals were the electric guitars.

Whatever you are willing to spend, there’ll surely still be an electric guitar to fit your budget. Whether you’re after a top-of-the-range Fender Strat, a gig-worthy axe for the road, or a beginner model to get you started, you’re going to find what you are looking for here.

Read on to discover our expertly curated and comprehensive list of the very best electric guitar deals we’ve seen so far, including offers from the biggest brands like Epiphone, D’Angelico, Schecter and loads more.

Ibanez AZ2204F Prestige: $400 off at Musician’s Friend
Invest in your guitar playing, and get one of the finest electric guitars available today for $2,099, a $400 saving from its original price of $2,499. This precision-built, versatile model is the epitome of contemporary electric guitar design, with an impressive feature set and effortless playability.View Deal

G&L ASAT Classic Bluesboy: $299 at Musician’s Friend
Besides its beautiful Turquoise Mist finish, this limited-edition single-cut is notable for its humbucker/single-coil pairing, yielding toasty neck tones and snappy bridge spank. With a whopping $150 chopped off the asking price, this is one of the best bargains we’ve seen this Cyber Monday.View Deal

Epiphone Les Paul Traditional PRO-III Plus: , now $549
This Epiphone not only has the looks - thanks to a gorgeous flame maple top - but it has tones to die for, too, with made-in-USA Gibson ’57 Classic and Super ’57 zebra pickups, enhanced by coil-split, boost and phase controls via push-pull control pots. Sub-$1,000 Les Pauls don’t come much better than this, especially with $150 off the asking price at Musician's Friend.View Deal

Epiphone Limited Edition 1966 G-400 PRO: , now $349
Available in Cherry or Black, this SG is the real deal for a bargain price. You get the classic horned mahogany body and Silm Taper set mahogany neck, teamed with a pair of high-output Alnico Classic Pro humbuckers, ideal for getting your Iommi on.

Epiphone ES-339 P90 PRO: $379 at Musician’s Friend
An almighty $120 discount makes this P90-loaded semi-hollow a must-buy for blues and roots guitarists, and boasts added comfort thanks to a reduced ES-style body and SlimTaper ‘D’-profile neck.View Deal

Epiphone Slash Firebird: now $599 at Sam Ash
Slash may be best known for wielding Les Pauls, but his partnership with Epiphone has yielded this particularly attractive take on the Firebird, boasting a Translucent Black-finished AAA flame maple top and three-piece mahogany body, teamed with Seymour Duncan ‘Slash’ open-coil humbuckers. A tidy $200 saving is available if you’ve got an appetite for, um, discounts.View Deal

ESP LTD M-400 in Natural Satin: over $300 off!
This Seymour-Duncan loaded electric guitar is built for the recording and performing guitarist. And now with over $300 off, there's never been a better time to get your hands on it! Act fast to secure this awesome guitar before the crowd.
View Deal

ESP LTD MH-400NT in Natural Satin: only $409.99!
Featuring a mahogany body, 3-piece maple neck and a Pau Ferro fretboard which complements the Natural Satin finish wonderfully, this awesome electric guitar is now almost half off over at ProAudioStar.

ESP LTD EC1000 Koa Natural: , now $599.99!
Get one the most iconic models in the ESP LTD range for only $599.99 down from $1,049 - over 40% off! Finished in a beautiful Koa Natural, this stunning instrument would make a worthy addition to any guitar collection.View Deal

Jackson Misha Mansoor Juggernaut HT6: only $449.99
Unleash the prog this Black Friday with an unbelievably good value metal guitar. Designed by the Periphery axeman himself, this guitar is built to shred.View Deal

Sterling by Music Man John Petrucci JP70: only $449.99
Now this really is a dramatic turn of events – a John Petrucci signature seven-string in stealth black for under $500! Astonishing deals like this don’t come every day…View Deal

Danelectro 59X12 12-String Electric Guitar: only $429
Danelectro calls the 59X12 their best sounding 12-string ever. And at only $429 there's ever been a better time to finally own a 12-string!View Deal

$130 off Epiphone's Les Paul Silverburst at Musician's Friend
This sleek, nicely spec'd Les Paul is now available for $549, down $130 from its usual $679 price tag.View Deal

Get $30 off the Epiphone Limited Edition Les Paul Special-I
This is a limited edition version of Epiphone's best selling model. Loved by both beginners and seasoned veterans, this thing is a workhorse that's now available for just $129.View Deal

Gretsch Guitars FSR G5245T Electromatic Jet: only $499.99
Save $150 on this stunning Gretsch Electromatic electric guitar over at Guitar Center. With a mahogany body and maple top, and 22 medium jumbo frets on a walnut fretboard, this guitar has it all - looks, tone and style. View Deal

Fender Player Telecaster: was $674.99 now only $574.99
Get your hands on an authentic Fender Telecaster this Black Friday for just over $500. With a classy Silverburst finish and A-class tone, this guitar would be more than a worthy purchase.View Deal

Get $150 off the Epiphone G-1275 Double Neck
For when one neck just isn't enough! This limited edition doubleneck is guaranteed to turn heads, from the living room to the stage. View Deal

43 D'Angelico Deluxe guitars: up to $1,200 off @ ProAudioStar
By far one of the best electric guitars this Black Friday and Cyber Monday is these ridiculous discounts on 43 semi-hollow models from D'Angelico, with some markdowns reducing $1,999 guitars to just $799. Not to be missed.View Deal

Fender Player Jaguar in Surf Pearl: now only $499.99
Now's your chance to bag an awesome Fender offset for under $500. With an alder body, Alnico pickups and a perfectly configured neck, this electric guitar has the looks and tone to boot.View Deal

Squier Bullet Mustang: now only $119.99
Get the perfect electric guitar for beginners in this unbelievable Black Friday deal. Start playing straight out of the box, thanks to a short 24" scale, which makes your first chords and solos easy.View Deal

Start playing for less with $30 off this Squier FSR Bullet Tele
This rock-solid, entry-level Tele is perfect for beginners and students, and is available now for just $149 - $30 off its usual $179 price tag!View Deal

Start playing for less with $50 off this Squier Bullet Tele
A great deal from Musician's Friend, this rock-solid, entry-level Tele is perfect for beginners and students, and is available now for just $129 - that's a massive $50 off the usual $179 price tag!View Deal

Save $350 on the ESP Bill Kelliher’s BK-600 signature guitar
Selling right now for just $799 at Sweetwater, Kelliher's signature guitar - complete with a pair of Lace Sensor Dissonant Aggressor humbuckers - is designed to be played hard and heavy.View Deal

SOLD OUT
Ibanez's superlative AZ242F TSG: was $1,299, now $899
We’re not kidding when we say the Ibanez AZ series is one of the very best in the world, so getting that level of quality and design for just $899 is, quite frankly, a ridiculous deal. Get yourself this fast-playing, Tequila Sunrise Gradiation-finished solidbody with world-class Seymour Duncan pickups and Gotoh hardware before they’re all gone.View Deal