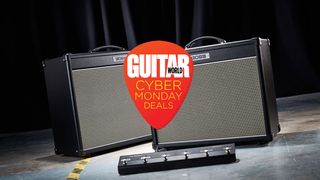 The loudest gear Black Friday had to offer this year was its oh-so-temping array of discounted guitar amps. Luckily, many of the discounts are still out in full force.

Below, we’ve rounded up the backline that should be front of your mind during this busiest of shopping seasons.

Free footswitch w/ Hughes & Kettner GrandMeister Deluxe
The German amp co's ingenious GrandMeister Deluxe 40 head is one of the most versatile amp heads on the market, but you'll need a footswitch to make the most of it… What good fortune, then, that you can buy this tube and FX-loaded head and get an FSM432 MKIII footswitch (worth $219) absolutely free right now over at Sweetwater!View Deal

Yamaha THR10C: was $299, now $249 at Sweetwater
Although the THRII has just dropped, the original THRs more than hold their own, and the THR10C is the most tonesome of the lot. It offers five boutique-inspired clean to overdriven tones, and is now available with a tidy $50 discount. Smoooooooth.View Deal

Get the highly regarded Fender Bassbreaker for only $549
With a Celestion 1x12 speaker, tons of recording-friendly features and an unparalleled tone, this combo is a true all-rounder - and it's now available for $200 off in this limited-edition finish!View Deal

Boss Nextone Artist amp: $499.99 | $200 off at Sam Ash
The bigger brother in the do-it-all series, offering the same tones and effects, plus even more versatility and power at 80-watts.View Deal

Marshall Origin 50C: was $749.99, now $549.99
Get this all-in-one combo amp from one of the world's most prestigious amp manufacturers - complete with two distinct voices, multiple onboard controls and a built-in FX loop.View Deal

Vox MV50 AC: was $219, now $149 at Musician’s Friend
Capturing the sounds of Vox’s iconic AC30 combo, the MV50 AC is the cheapest, most compact way to get the sounds beloved of The Beatles, Radiohead and U2 in your backline.View Deal

Vox MV50 Clean: was $195, now $149 at Musician’s Friend
Anyone after a high-headroom pedal platform will want to check out this bargainous mini amp from Vox, which delivers 50W of output via a Nutube power amp and Class D power amp.View Deal

Vox MV50 High Gain: was $219, now $149 at Musician’s Friend
Need high gain from a tiny package? Vox has got you covered with this diminutive yet all-powerful head, which boasts a mid control switch to boost or cut the mid-frequency range, spanning tones from hard rock to metal.View Deal

Vox MV50 Boutique: was $219, now $149 at Musician’s Friend
If your tastes veer into unobtainium levels of boutique amplification (ie, Dumble), you’d be wise to check out this teeny amp head from Vox, which goes some way to capturing the sound of those legendary amps for a fraction of the price.View Deal

Get $500 off the Supro 1650RT Royal Reverb
This powerhouse of an amp is loaded with tube-driven tremolo and spring reverb, and comes with Supro's trademark blue rhino hide tolex, for classic looks and a classic sound.View Deal