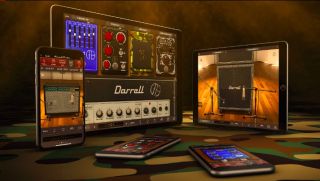 IK Multimedia has announced that its Dimebag Darrell CFH Collection is now available inside AmpliTube for iPhone and iPad. The collection, which models the exact gear used by Dimebag to record Pantera's classic 1990 album, Cowboys from Hell, was developed in conjunction with Dime’s longtime guitar tech and right-hand man, Grady Champion, and carefully models all the personal guitar effects, amplifiers and cabinets Dime used in the studio while recording the album.

The CFH Collection features nine brand new models including two amps, two cabinets and five stompboxes. The full list of models, courtesy of IK Multimedia, can be seen below:

Modeled to meticulously mirror the much-coveted Randall RG 100 ES solid-state, 120 watt amplifier. The sound and tone of this amp became famous when Dime started using it in the early Pantera days.

Based on the 1986 Roland JC-120, this amp was used on the song “Cemetery Gates.” Fine-tuned to match the exact tone you hear on the album.

Based on the Randall 412 JB 4x12-inch cabinet and is the perfect companion to the Darrell 100 amplifier.

Based on the cabinet section of the Roland JC-120 amp combo which features 2x12-inch speakers.

Six-band graphic EQ based on a unit by MXR, this was used to shape and boost the sound before the amp.

Three-Band Parametric EQ, based on the Furman PQ-3, which offers great flexibility for sound shaping.

Based on the Dunlop Cry Baby GCB95. Modeled with precise attention to Dime’s lead tones.

Based on an MXR Flanger Doubler, this model offers two effects in one. Primarily used by Dime in “doubler mode” to thicken in his overall tone.

Fast and very responsive. Based on the Rocktron Hush IIB model.

For more information, head over to IK Multimedia.