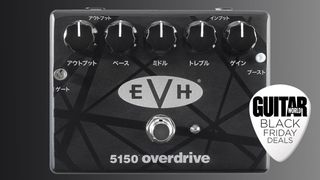 The EVH 5150 Katakana overdrive pedal comes replete with Japanese Katakana script underneath the controls but it is business as usual inside the stealth black on dark gray enclosure – and if you point your cursor to Sweetwater, you'll find an awesome Black Friday deal that will save you a whopping 70 bucks.

What makes this EVH 5150 overdrive so special? Well, that it looks cool and is limited edition is a bonus, but under the hood you have got a circuit that replicates all the harmonically rich crunch of the Blue Channel from Mr EVH's signature EVH 5150 III head.

As our very own Paul Riario said in his review of the original US EVH 5150 overdrive, which is all but identical save for the Japanese script, "Every so often a pedal comes around that knocks your socks off, and this is one of them."

There are controls for ouput and gain, plus, much like the amp, a 3-band EQ for dialling in your tone. And, for those tender and special moments when you need to melt some faces, the boost button is on hand for a little extra hot sauce and compression to really make your leads rip.

If you are worrying about this getting noisy, well rest assures, courtesy of the onboard MXR M135 Smart Gate circuit the EVH 5150 Katakana has plenty juice without adding too much hum to your signal path.

Other features include a nigh-on indestructible (i.e. roadworthy) construction, true bypass operation, and as you may expect it takes 9V of DC power to get going.

Head on over to Sweetwater and bag one for $129.99 and save 70 dollars on a stomp box that's on the  pantheon alongside Guitar World's Platinum Award winners.

MXR EVH 5150 Katakana Overdrive: $70 off at Sweetwater
This limited-edition drive pedal has been given a limited edition Japanese makeover but inside the enclosure you'll find the Blue Channel of Eddie's signature 5150 III head. It's one of the best overdrives on the market and could be yours for just $129.99.View Deal