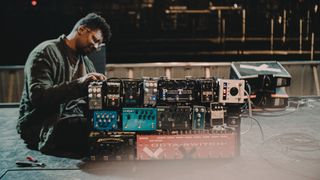 An amazing number of top-notch guitarists – Megadeth’s Dave Mustaine and the members of Periphery among them – have partnered up with Reverb.com recently to unload some of their iconic gear.

Now we can add to that list Animals as Leaders electric guitar wizard guitarist Tosin Abasi, who will be selling through 100 guitars, pedals, pickups and amps used on albums and tours through the online music retailer.

Among the items that will be available in the Official Tosin Abasi Reverb Shop is an Ibanez TAM100 eight-string that he used extensively to write and record Animals As Leaders’ The Joy of Motion, as well as on tour to support the album. “This was one of my main touring and recording guitars,” Abasi said. “It just has a ton of mojo.”

A Fractal Audio AX8 Amp Modeler & Effect Processor that includes Abasi’s personal stage presets. “This unit was used for international touring and clinics for The Joy of Motion and The Madness of Many tour cycles as well as with Generation Axe with Steve Vai, Yngwie Malmsteen, Zakk Wylde, Nuno Bettencourt, and more.”

A Strandberg Boden eight-string used extensively on Animals As Leaders’ 2016 album, The Madness of Many. “The multi-scale wenge neck, flamed-maple top, true-temperament frets, and Lungren pickups makes this one of the best-spec’d Strandbergs around,” said Abasi.

The Official Tosin Abasi Reverb Shop launches on February 26. You can find out more at Reverb.