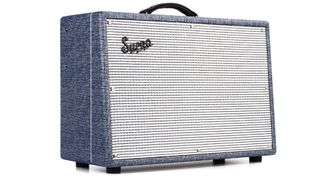 Black Friday has arrived in earnest, and the amazing deals on guitar gear are truly starting to flood in. Sweetwater, for its part, is getting in on the action with an incredible deal on the Supro 1650RT Royal Reverb guitar amplifier.

This powerhouse of an amp is loaded with tube-driven tremolo and spring reverb, and comes with Supro's trademark blue rhino hide tolex.

Elsewhere, independent treble and bass controls in the Royal Reverb's preamp allow for amazing tonal versatility, while its 3-way switchable power scheme allows users to get any number of textures and tones.

It's rare that you can get classic looks and a classic sound like this for under a grand, so be sure to grab this deal while it's hot!

Get $500 off the Supro 1650RT Royal Reverb
This powerhouse of an amp is loaded with tube-driven tremolo and spring reverb, and comes with Supro's trademark blue rhino hide tolex, for classic looks and a classic sound.View Deal