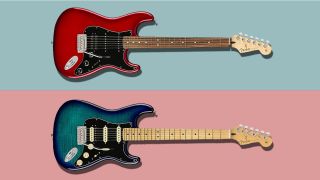 The biggest shopping extravaganza of the year is only a week away. Here at Guitar World we're trawling the internet to find the best and most jaw-dropping Black Friday guitar deals, so you don't have to.

Guitar Center is one of the first retailers out of the gate, offering massive discounts on some of the biggest brands. This unbelievable deal on a couple of limited edition Fender HSS Stratocaster electric guitars sees up to $150 discount being applied. Both guitars are now just $549.99.

The Candy Red Burst model (originally $674.99) features an alder body - a material famed for its light weight and well balanced low end and mid range - and a C-shaped neck with 22 medium jumbo frets on a Pau Ferro fretboard. Everything about this guitar screams style and playability.

The Blue burst model (originally $699.99) features an alder body with a gorgeous flame maple top. Like the red model, it also features a C-shaped neck and 22 medium jumbo frets, but instead has a maple fretboard which complements the blue body perfectly.

In our experience, Guitar Center’s Black Friday deals tend to be very short-lived due to such high demand and potentially limited stock, so act fast if you want to get your hands on one of these timeless guitars for less.

Fender Player Stratocaster HSS (Candy Red Burst): $549.99
This guitar was $674.99. Today you can save $126 and pick up a true bargain. An alder body, Pau Ferro fretboard and HSS pickup configuration are the best features of this fantastic guitar.View Deal

Fender Player Stratocaster HSS (Blue Burst): now $549.99
Save $150 on this stunning Fender. The guitar features an alder body with a flame maple top finished in a gorgeous blue burst. With a maple fretboard, HSS pickup configuration and two tone knobs, this guitar has the looks and the tone.View Deal

15% off every order today over at Guitar Center
Thanksgiving deals don’t come better than this: simply enter the code GIVETHANKS at the checkout, and you'll get 15% off all the guitars, amps and pedals your heart desires!View Deal