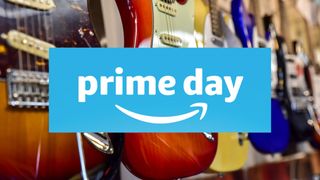 Amazon Prime Day 2020 is almost upon us, with the dates having been officially confirmed by Amazon as 13 and 14 October. We’ve got everything you need to know about the 48-hour sales bonanza right here, including where you can discover the best Prime Day guitar deals, both on Amazon and other music sites.

While Prime Day is traditionally known as a chance for Amazon Prime members to get their hands on exclusive deals on tech and household items, we’re expecting some fantastic deals for guitarists too.

The big question we're hoping we can answer as we get closer to Prime Day is whether you will be able to pick up a new acoustic guitar or a killer guitar amp at a cut price. There will definitely deals, starting now, and continuing right up to Prime Day. We'll share the best offers on guitars, amps, pedals, guitar accessories and more right here.

In the past Amazon itself hasn’t been particularly forthcoming with great Prime Day guitar deals, however last year we saw some truly standout offers – the most popular being 30% off 106 D’Angelico guitar models – plus some cool discounts on guitar accessories and gadgets like guitar wireless systems and electric guitar strings. We’re hoping for an even bigger showing from Amazon this year.

We’re also on the lookout for great guitar deals from non-Amazon retailers like Sweetwater, Guitar Center and Pro Audio Star.

This page is your place to find the very latest Prime Day 2020 news and the most up-to-date Prime Day guitar deals.

Get 90 days of Amazon Music HD for FREE
This ace music streaming deal gives you access to over 60 million songs in HD quality, plus 5 millions songs in Ultra HD. Try it for the next 90 days for nothing.View Deal

Epiphone Limited Edition SG Special-I: , now $129.99
Perfect as either a beginner electric guitar or a seasoned player's reliable workhorse, this guitar is a true all-rounder at an incredible price.View Deal

Save $50 on the 'Stomptrooper' edition of Line 6's HX Stomp For just a hair under $600, you get space for 126 presets, over 300 effects and amps, the HX Stomp's trademark triple capacitive-footswitch setup and a whole lot more - all with a sleek, decidedly galactic look.View Deal

Vox AC15 Custom Vintage Black: was $799.99, now $599.99
Save $200 and get the sound of the British Invasion with this feature-packed combo over at Sweetwater, as part of their monster Guitar Month Sale.View Deal

Ernie Ball Ambient Delay: was $125, now $74.99
Fade in your delay and reverb using this smart pedal’s built-in expression pedal, and save over $50 while you’re at it.View Deal

Free backpack with the Line 6 Helix LT at Sweetwater
When looking for a multi-effects unit for your guitar that is super-programmable, so easy to use that the manual is almost superfluous, and with over 200 cab sim, amp models and effects on hand, the Helix LT is a no-brainer. But with a free backpack? Now's the time to get one.View Deal

When is Prime Day?

Amazon Prime Day usually takes place at some point in July. Last year it ran from July 15 to 16 (yep, it’s not actually a single day event at all, despite the name), offering 48-hours of deals, sales and discounts.

Obviously this year has been peculiar for a number of reasons, and as a result Prime Day didn't happen in its usual July slot. But Amazon has now confirmed it will be hosting Prime Day on 13 and 14 October.

The official Amazon press release states, "Amazon’s annual Prime Day event is back in time for the festive season, taking place on 13th and 14th October. The two-day shopping event delivers Prime members incredible savings and deep discounts on over one million deals globally across every category. Prime Day kicks off at 00.01am on Tuesday, 13th October and runs through to 23.59pm on Wednesday 14th October, for Prime members in the U.K, U.S., U.A.E, Spain, Singapore, Netherlands, Mexico, Luxembourg, Japan, Italy, Germany, France, China, Canada, Belgium, Austria, Australia, and – participating for the first time this year – Turkey and Brazil."

Beyond Prime Day, we're expecting Black Friday 2020 to kick off in its usual spot at the end of November, so it looks like we’ll be in for a bumper period of guitar sales and deals from now, right up to Christmas.

Do you need a Prime subscription?

Do I need an Amazon Prime subscription?

If you want to take advantage of Amazon’s Prime Day guitar deals the answer is a big fat yes. Amazon always offers free trials to those who haven't used the service before, so if you were feeling tactical you could sign up for a free trial closer to the event, grab the most enticing bargains and then cancel your subscription once the items are in your hands, but we didn’t tell you to do that...

There are plenty of perks to being an Amazon Prime Member, of course, including faster delivery options, exclusive deals and access to Prime Video, so it could be worth becoming a fully paid up member if you're a regular Amazon shopper.

Where to find the best deals

Will there be many Prime Day guitar deals?

Lockdown saw an unprecedented rise in the number of new musicians and lapsed musicians returning to an instrument, and particularly the guitar, so we have faith that Amazon will cater to this new wave of guitarists and musicians by lining up plenty of fantastic Prime Day guitar deals.

Will other stores be offering Prime Day guitar deals?

In 2019, in addition to Amazon, there were great guitar discounts doing the rounds from Fender Play, Musician’s Friend and Guitar Center, plus Walmart and Best Buy on everything from beginner acoustic guitars to reverb pedals. We’re hoping for more guitar activity from retailers including Sweetwater and Pro Audio Star in 2020. We heard whispers of some great guitar offers on the horizon, so watch this space.

Although it’s an Amazon invention, Prime Day has always created a buzz and gets people in the mood for a bargain. Because of this, we’re confident more retailers will get involved with great Prime Day guitar deals this year.

What else should I look out for on Prime Day?

With Prime Day being an Amazon invention, it's likely you'll find money off Amazon's own products. So, if you've been thinking about purchasing an Amazon Echo device, like the music-friendly Echo Studio, or the compact Echo Dot, Prime Day could be the time to get a big discount. In 2019, Amazon was running deals on its smart speakers with bundles that included free subscriptions to their Music Unlimited streaming service.

Save 30% off 106 D'Angelico electric and acoustic guitars
Was this the best Amazon Prime Day deal of 2019? D'Angelico was offering massive discounts off a colossal range of electric, acoustic and bass guitars!View Deal

Supro Jamesport electric guitar: was $899, now $519
This retro-vibed single-pickup number is one of the highlights of Supro’s mammoth guitar range, boasting a Gold Foil designed to capture those classic blues-rock vibes. Last year it was available with a monster $380 discount.View Deal

D'Addario NS Micro Clip-On Tuner. Was $17.93, now $15.65
You'll never go out of tune with this clipped to your guitar or bass. It's easy to use, displays tuning information clearly and can be mounted discretely on the rear of your headstock.View Deal

Learn to play guitar with Fender Play. Get 50% off here
The Fender Play learning platform is one of the easiest and most affordable ways to learn to play guitar – and it got even cheaper on Prime Day 2019 with 50% off an annual plan, bringing the monthly price down to just $4.99/£4.79.View Deal

Fender PM-TE travel acoustic guitar. Was $699, now $369
An almighty 47% discount made this one of the very best acoustic guitar deals of Prime Day 2019. Fender's top-spec travel guitar boasts a solid Sitka spruce top and solid mahogany back and sides, plus a Fender/Fishman-designed preamp – and hardcase!View Deal

Line 6 Firehawk 1500 stereo guitar combo amp
Down from $999 to $799 at Musician's Friend
This six-speaker stereo amp is designed to perfectly replicate its vast array of onboard effects, which can be controlled via Bluetooth. And at $799 on Prime Day, it made for a nicely priced one-stop guitar tone shop.View Deal

Catalinbread NiCompressor: was $249, now $209 at Zzounds
The NiCompressor’s tone-shaping capabilities are what looks to set it apart from other compressor pedals: bass and treble controls are on hand for tonal fattening, as is a gain control to add grit.View Deal

Learn to play with the Jamstik +. Was $299.99, now $199.02
The Jamstik+ is a great entry point to learning the guitar. It feels great to play and connects via Bluetooth to a huge selection of fantastic tutorials and apps.
View Deal

Ernie Ball Slinky Nickel Wound (3 pack). 62% discount
You can never have too many sets of strings, and Prime Day was the time to stock up, with a whopping 62% off a three-pack of Ernie Ball Slinky strings.View Deal

MEE audio M6 PRO in-ear monitors Was $49.99. Now $36.99
From the studio to the stage, you'll be able to hear your playing with greater clarity and richer audio with the MEE Audio M6 PROs. This Prime Day deal was hugely popular.
View Deal

Marshall Monitor Headphones: was $249, now $129.99
Yes, they're Bluetooth, and yes, they'll give you 30 hours of playtime before you need to recharge, but the main reason to pick these up on Prime Day was because you'd look like you have a couple of Marshall stacks clamped to your skull, and that's priceless.View Deal